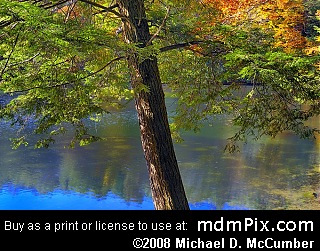 Pennsylvania made a wise choice by selecting the Eastern Hemlock as its state tree for I can't think of any tree more majestic in Pennsylvania and better in appearance both close and far away no matter what the time of year. The Eastern Hemlock can tower up to 175 feet in height and has been known to live over 550 years. Most of the Pennsylvania highlands were once darkened by its cathedral like under story until the state's forests were clear cut back in the 1800s. Only a few patches of old growth Hemlocks were spared, a few of which reside in the Laurel Highlands of Pennsylvania such as Ohiopyle State Park, Pennsylvania's Ferncliff Peninsula and an area in Laurel Hill State Park. Nonetheless, the tree can be found along many moist stream bends and ravines throughout the forests of Pennsylvania.