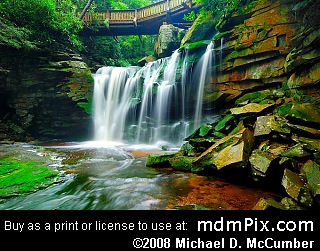 Elakala Falls is located near the lodge in Blackwater Falls State Park, West Virginia and is formed by Shay Run descending into the steep sided Blackwater River Gorge. The falls is made up of three main plunges with only the top one accessible with relative ease. After the initial Elakala Falls, the grade becomes roughly 50% with a 350 foot plunge that makes accessing the lower two falls require many hours of dangerous effort. I've photographed the lower two falls from across the gorge at Pendleton Point and come to the opinion that the top waterfall, while smaller than the others, is considerably more photogenic. Depending on the lighting and amount of water flowing, Elakala Falls has to be the most photogenic waterfall I've ever had the honor of capturing. It can be found near the Blackwater Falls State Park, West Virginia lodge and is actually a group of three plunges Shay Run performs tumbling into Blackwater Canyon. The most accessible is the top waterfall, which is featured, while the second one isn't too hard to reach. The third requires a dangerous trek deep into the canyon and because its really a very long steep slide of water it is far less scenic than the top two. The top waterfall is about twenty-five feet tall.