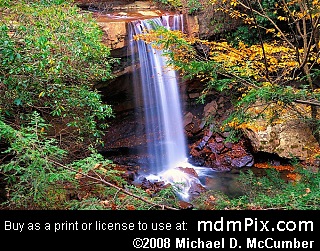 Perhaps western Pennsylvania's most scenic waterfall is Cucumber Falls spilling 39 feet over an overhanging cliff into a cucumber shaped deep gorge less than a hundred yards from the Youghiogheny River in Ohiopyle State Park, Pennsylvania. While only an hour or two a day, around noon, can sunlight flicker off the waterfall's sprays I've found the best time to photograph it is during the twilight hours shortly after sunset when an even lighting suppresses the harsh contrast between the waterfall and the gorge walls. An observation point to the right of the waterfall offers a view looking down into the gorge, while circumventing the rough floor of the gorge allows a photograph from the base of Cucumber Falls. Summer time is probably the most challenging period to photograph the waterfall as visitors are often playing around the waterfalls base enjoying a natural shower, and the water level in the falls can be reduced considerably. Winter sees a natural ice sculpture form with a mountain of spray fed snow nearby.