My photographs can be found on the back of potato chip bags (Snyder of Berlin) in stores throughout the region, on display throughout at least one hospital, and several hotels from Pennsylvania to Arizona. They've been used in countless brochures, calendars (including the official PA State Park Calendar), annual reports, tourism guides, trail guides for both the Great Allegheny Passage Trail and Laurel Highlands Trail, billboards, books, and magazines. They adorn the walls in homes and offices in over 35 states and provinces. 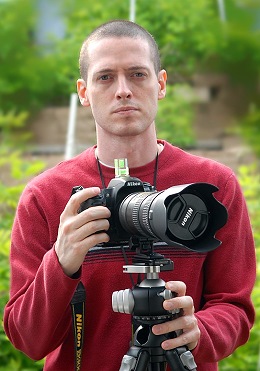 While I was always interested in nature and the outdoors, I didn't get into photography until around the age of 14, when with a cheap film camera I began taking photographs of the mountains above my native South Connellsville, PA as well as many winter scenes. In looking back at those first photographs, I'm often surprised by how well the compositions took shape and the choice of subjects to capture.

By the age of 19, I got more serious with my photography after I happened to be in the Laurel Mountains at a stunning peak of autumn there. Ever since that time, October has been a yearly quest to find the best areas of color and to capture as many of the fleeting scenes as time could afford. I could almost identify that exact point in time when this autumn obsession began, as I was driving up Chestnut Ridge and left the lowlands where the trees were largely green the color broke out everywhere and even on a calm blue sky day the leaves were slowly falling from the trees. It was a tremendous autumn where every tree was displaying its best possible show, I would later discover such autumns aren't yearly occurrences and rather probably average once every four or five years.

For my first 10 or 15 years of photography, I was never schooled in the art. I was free to build my own style of photography without being tarnished by outside influences and through many trials and errors I discovered what worked and didn't. Only later did I actually pick up and read some books on photography, more to better choose what new equipment to buy than anything else. Having developed a style for landscape photography all my own, I now subscribe to magazines such as "Outdoor Photography," but more to keep in tune with how the industry is progressing as well as the technology that now governs it.

After waiting for a benchmark mega pixel number to be surpassed, I dived into the digital age with photography in 2005 through the purchase of a Nikon D200. I don't miss film's inconveniences, and especially the scanning.

Even after many years of photography my style of photos is drifting. Originally I foolishly photographed around the high sun hours of noon or there about, but no more. I either capture scenes early in the morning or late in the afternoon or evening. Most of the autumn photographs I've taken in the past two years were captured prior to the sun setting, which is the reason for their vibrant color. Even green trees have a slightly yellow tint to them while lit by the sun's setting light, so trees already turned offer unrivaled color when lit by the rays of a setting sun. This of course means more days in the field taking pictures as you are limited in the amount of locations you can capture when your photography is done only in a window of an hour or two per day.