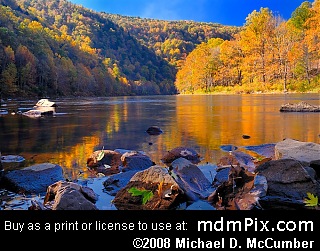 Chestnut Ridge is the western most mountain range of the Allegheny Plateau that extends nearly 90 miles from southeast of Morgantown, WV to northeast of Indiana, PA. In Pennsylvania, it is considered part of the Laurel Highlands. Chestnut Ridge reaches its highest elevation, 2778 feet, southeast of Uniontown, Pennsylvania at a fire tower along Skyline Drive, though many knobs here surpass 2700 feet. The ridge loses some of its elevation to the north where it only rises to 2000 feet before fizzling out in Indiana County. The high elevation can afford panoramic views where trees have either been cleared away or kept at bay by rock and cliff formations. The skyscrapers of Pittsburgh, Pennsylvania (60 miles distant) can be seen on a clear day from the scenic overlook at Jumonville, Pennsylvania, east of Uniontown. Of any town along its base, Uniontown enjoys the most impressive view of the ridge that lies five miles to its east as Chestnut Ridge makes an abrupt 1500 foot rise here giving the city a formidable eastern wall. Several rivers have carved impressive water gaps, most notably the Cheat River and Youghiogheny River where steep sided gorges offer panoramic scenery. The ridge was named for the American Chestnut trees that once covered its slopes until blight wiped them out. It is said that the ridge appeared snow covered in May as the trees were displaying brilliant white blossoms. A stark climate difference exists between Chestnut Ridge and the valley to its west as the top is often 5 to 10 degrees cooler than the western valley and receives 20 more inches of precipitation per year. Lake effect snow flurries affecting Uniontown often become heavy snow squalls over the ridge as the clouds are forced to rise up over the higher elevation. Travel over the Chestnut Ridge requires close scrutiny during the colder months as rain falling at the base of the ridge can turn to dangerous ice or snow at the top.