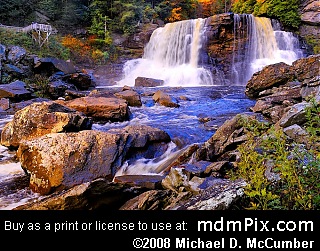 Blackwater Falls, a third the height of Niagara Falls, is made up of the Blackwater River that drains Canaan Valley plunging 62 feet into the wild and rugged Blackwater Canyon. The waterfall is the most famous in West Virginia and can be found on postcards throughout the state. Blackwater Falls water flow can range from a single wall of water from shore to shore to two separate water floes separated by a beak of rock in the middle, but normally visitors will discover something in between. Blackwater Falls State Park, West Virginia has an observation deck that entails hundreds of steps down into the canyon to a long wooden deck that gets pretty close to the waterfall from the western side. This is how most people experience Blackwater Falls. Another alternative is from the eastern side and parking at the Gentle Trail Overlook that provides a distant peek at the waterfall from a distance away. You can get close to the waterfall's precipice following some side trails off of Gentle Trail that leads to a window above the waterfall. The final option is rarely taken and involves a dangerous climb down into the Blackwater Canyon from the parking lot for Gentle Trail. After navigating through some rough terrain you'll reach the river and following it (by climbing up and over some large rocks) you'll find yourself with a head on view of Blackwater Falls. You can get close to the waterfall's base, but the cliff meets the river before you can get to the water and in this spot poison ivy seems to carpet the terrain.